Shell and the AirFlow Truck Company has reported huge improvements in efficiency.

Shell and AirFlow Truck Company lately announced the final success and the results from a recent trip in the United States that stretched from one coast to the other achieving a cargo tonnage efficiency of 178.4 tonne-miles per gallon (68.9 tonne-kilometres per litre).

This suggests an improvement that is 2.5 times higher than that of the North American average, which is around 72 tonne-miles per gallon (27.8 tonne-kilometres per litre). Cargo tonnage efficiency is considered one of the more relevant statistics that can be used to judge the intensity of the associated energy with the transport of cargo from point A to point B, given that, it combines the weight of the cargo that moves with the quantity of the consumed fuel.

This trip marks a before and after, since that it is the first time that Class 8 prototype has crossed the United States, running more than 3,700 kilometres equivalent to 2,300 miles in inland transport operations. This included scenarios whereby the truck encountered unforeseen issues, including unplanned stops and torrential rains. 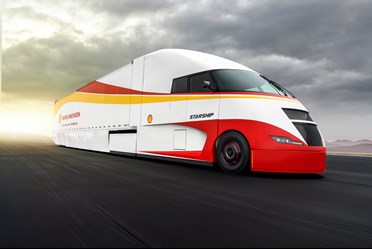 Addedly, it has been estimated that if the two million trucks that circulate in the US were the Starship, it would achieve fuel savings that would translate to 229 million tonnes less of CO2 emissions every year.

These measurements were verified by an independent agent in the mould of the North American Council for Freight Efficiency, through the utilisation of a telematics system aboard the Starship. The results are very timely, given that the global transport sector especially on motorways is looking to “go further with less”, in order to reduce fuel consumption, whilst maximising cargo to reduce costs and comply with fuel saving regulations.

“We are very proud that the Starship has been able to complete to run from coast to costa in real inland transport conditions, including torrential rain. Our objective in this initiative is to challenge the way in which the transport industry for trucks defines its efficiency and establish future debates with AirFlow Truck Company and other manufacturers,” confirmed Robert Mainwaring, the Technology Manager for Innovation at Shell lubricants.

The strong performance of cargo tonnage has been attributed to a combination of the technology of Shell lubricants, improved aerodynamics that includes a personalised carbon fibre cabin and lateral skirts along the side of the trailer and the engine efficiency of the Cummins X-15 that counts on tyres with low rolling resistance and intelligent strategic driving.

The vehicle was lubricated with a Shell motor oil of low viscosity, that yields protection against wear and tear, tanks and the decomposition of oil, as well as Shell transmission oils, differential oils and wheel hub oils. The technology of the engine oils shares the same viscosity that Shell Rimula Ultra E + and is being tested by OEMs all over the world.

Richard Wilson is a correspondent for Truck & Bus News. Since 2015, Richard has worked as a correspondent for all of the titles across the Valebridge Publications Ltd Group namely: Retreading Business, Tyre & Rubber Recycling, The Tyreman and Commercial Tyre Business. Richard has worked on/off from the age of 16 for the company and whilst gaining a Bachelor's Degree in Spanish and Business Studies at Coventry University, he developed his writing skills at the University paper and more recently writing his own independent blog.